Markers are little icons used in graphs on AppSignal.com to indicate a change. This can be a code deploy using a "Deploy marker" or a special event with a "Custom marker". Deploy markers can also be found in the "Deploys" section in the app navigation which provides a performance overview per deploy.

📖 Also read our guide on how to set up deploy markers. 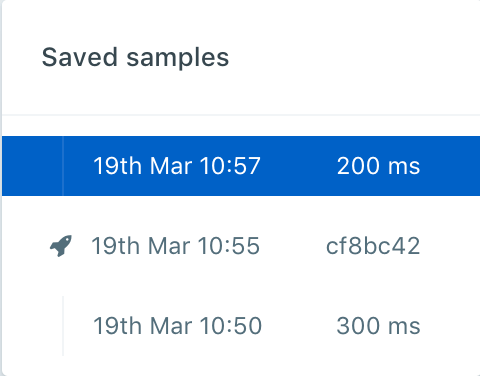 The first method (revision config option) is our recommended approach, because it's the most reliable method and works better for applications with more than one host. We detect the revision from the application itself so we know which instance is running what version.

The second approach (creating a deploy marker manually) is a method only really useful for small applications that use one host. It creates a new deploy marker at a specific time, regardless of the version the application is actually running. This also means it's also more error prone.

The recommended approach of letting AppSignal know a new version of your application is deployed is by using the revision config option or the APP_REVISION environment variable (Ruby/Elixir)/Node.js). This is automatically detected for Heroku apps using the dyno metadata lab feature.

This config option is set per instance of an application which has the benefit of every version of an application running at the same time reporting the errors under the correct deploy, rather than the latest deploy that has been reported to AppSignal.

For example: If one machine is still running an older version of the application all the errors from that instance are reported under the previous deploy marker rather than the last known deploy marker.

If you're running a version in which this config option is not available we recommend using the APP_REVISION environment variable instead.

The APP_REVISION value can be any value you use to indicate a version/revision. For example: a version number 1.4.2 or a git SHA cf8bc42.

Manually creating a deploy marker using this method is only useful for small applications that use one application instance. It creates a new deploy marker at a specific time, regardless of the version the application is actually running. This also means it's also more error prone to group data that shouldn't belong to it under the deploy. We recommend you use the revision config option method.

This method of reporting new deploys to AppSignal requires that you send a POST request to the AppSignal Push API markers endpoint. This can be done with a (deprecated) CLI tool (for Ruby) or with a manual HTTP POST request for other languages. There is no CLI tool available for our other supported languages.

When the deploy marker create/notify request is received by the AppSignal servers, all data that is processed by our servers after that time is tracked under the newly created deploy.

To create a Deploy marker with a HTTP POST request you can use curl or some other tool like it. The payload of the request is a JSON object with data about the marker, such as the revision, user who deployed it and the application's repository.

Read more about how to create Deploy markers with our API in our API endpoint documentation.

The AppSignal for Ruby gem includes a (deprecated) CLI tool to allow creation of deploy markers from your app. See the notify_of_deploy CLI command documentation for more information. A similar CLI tool is not available for other language integrations.