Legacy notice: Dashboards used to be configured through a YAML file and this page explained how the YAML worked. These days we have a nice visual builder for both dashboards and graphs that is less error prone and easier to use.
We also switched from YAML to JSON for exporting and importing graphs between apps. This feature can be found in the dashboard options menu and when creating a new dashboard.

This page provides more detailed information about how some dashboard graphs options work. For all other options, please see the help icon with attached tooltip for more information.

Open the dashboard and graph builder in your app.

Some data is better understood if the graph is rendered in a different way. We provide three display options:

The image below shows the same metric in all three graph types. In the Line and Area graph you can see that the amount of data has increased, but the Relative area graph at the bottom shows that the relation between transmitted/received has not changed over time. 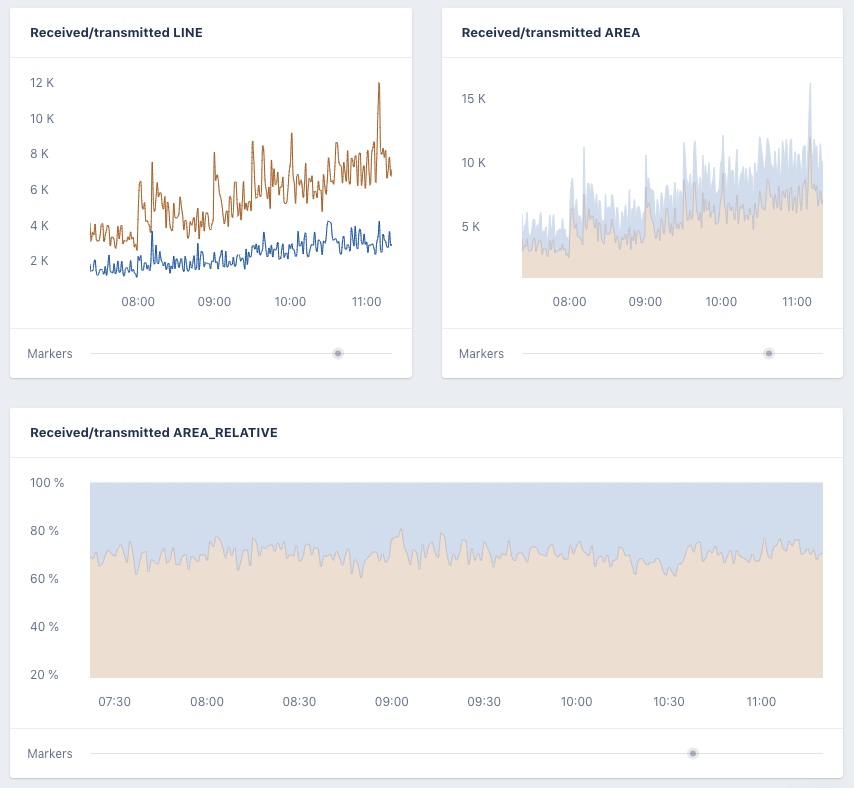 Not always does every point in time have a value for a metric, yet the value is not 0. In our system we do not record a value for this time and treat this point as NULL rather than 0. This means no value is present and can be interpreted in two ways. Either it was actually 0 or it retains the value of the last known data point in the graph.

See the difference in the graph below. With "Draw NULL as 0" the graph makes a sharp drop to 0 every time the app stopped reporting data. With "Repeat last known value" the graph looks less volatile in terms of lines moving up and down.

The app used to generate these graphs: