A Span is the name of the object that we use to capture data about your applications performance, any errors and any surrounding context. A Span can form a part of a broader trace, a heirarchical representation of the flow of data through your application.

It is designed to closely follow the concept of a Span from the OpenTelemetry standard specification, but there are some minor differences that we'll get into later.

A Span can be created by calling tracer.createSpan(), which initializes a new Span object.

A ChildSpan can be created to represent a subdivision of the total length of time represented by the RootSpan. This is useful for instrumenting blocks of code that are run inside of the lifetime of a RootSpan.

A ChildSpan can also be created by passing an optional second argument to tracer.createSpan().

See the Span API page for more ways to configure and add useful metadata to the Span.

A Span name is used to identify a certain sample error and performance issues in the relevant tables in our UI. It should concisely identifiy the work represented by the Span (this could be an RPC method name, a function name, or a route name).

The Span name should be the most general string that identifies a (statistically) interesting group of Spans, rather than individual Span instances. These names function as a grouping mechanism. Under no circumstances should they contain dynamic parameters such as IDs.

Adding metadata to a Span

After a Span is created, you can begin adding data to it using methods on the Span object:

Anything you set using this method will appear in the "Tags for sample" table in the Performance sample page.

Adding sample data to a Span

Sample data with the following key/value pairs can be set on the root span:

Filled with session/cookie data by default, but can be overridden with the following call:

This key accepts nested objects that will be rendered as JSON on a Incident Sample page for both Exception and Performance samples.

Filled with framework (such as Express) parameters by default, but can be overridden or filled with the following call:

This key accepts nested objects and will show up as follows on a Incident Sample page for both Exception and Performance samples, formatted as JSON.

Environment variables from a request/background job (typically filled by the default http integration, but can be further augmented by other integrations), but can be filled/overriden with the following call:

This call only accepts a one-level key/value object, nested values will be ignored. This will result the following block on a Incident Sample page for both Exception and Performance samples. 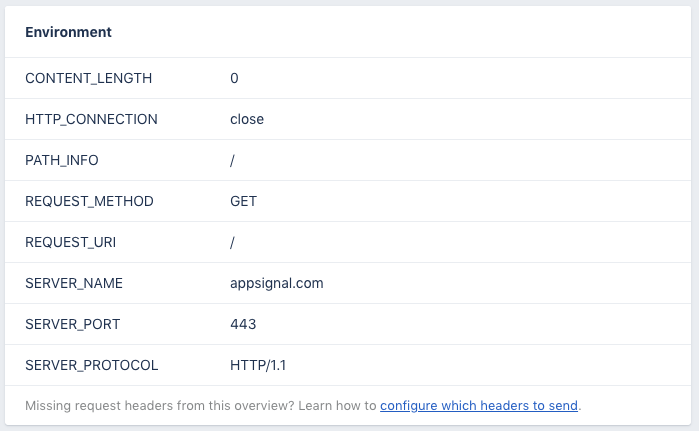 Custom data is not set by default, but can be used to add additional debugging data to solve a performance issue or exception.

This key accepts nested objects and will result in the following block on a Incident Sample page for both Exception and Performance samples formatted as JSON.